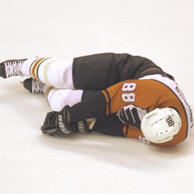 With the 2005 NHL Hall of Fame induction ceremony right around the corner, it got me to thinking about current players whose names might one day grace those hallowed walls (yes, I know the HoF is in a shopping mall, but I'm trying to set the scene here). One current player in particular might be "on the bubble," so to speak, but I'm here to end the suspense: when his playing career comes to an end, Eric Lindros's next stop will be enshrinement in the Hockey Hall of Fame. This may come as a surprise to many people who consider the E-Train's professional hockey life to have been a major disappointment. "So much potential wasted," they say. "Too bad he couldn't stay healthy." While Lindros, apparently so overwhelmed by the news of this yet-to-be-bestowed honor that he had to take a nap (pictured), could have accomplished more if he'd just skated with his head up, he undoubtedly has HoF credentials, especially when compared to a certain member of the HoF class of 2005, one Cameron Michael Neely. A quick look at some of the numbers makes this clear:
Of course, Lindros is still playing and adding to these totals on a knightley, err, nightly basis. And don't forget to factor in that scoring during Neely's career was significantly higher (7.48 goals per game in 1988-89, for example) than during Lindros's (only 5.27 goals per game in 1997-98). So Lindros scored much more in a lower-scoring era, has taken home more hardware and actually has been more durable than Sea Bass. Neely's a Hall of Famer. Is there any reason Lindros won't be?
Posted by JP at 10/26/2005 10:56:00 AM