March. In like Steve Lyon, out like Mark Lamb. But halfway through the month that ushers in spring is the all-too-frequently-overlooked psuedo-holiday (Stateside, at least) of St. Patrick's Day, which, oddly enough, celebrates St. Patrick, the patron saint of consuming green beer and eggs at eight o'clock in the morning.

As I pondered how I would honor the memory of the countless Irishman (Guinness and Smithwick, to name just two) throughout the centuries who have fought valiantly and made the ultimate sacrifice so that I could enjoy kegs and eggs, I found myself searching for a deeper meaning to attach to this annual commemoration. As I often do at such times, I turned to hockey and began to think of all the Patricks the game has seen through the years. Then I thought about the Pats. And the Patriks. But I never really thought about the Patrices, truth be told.

Anyway, what follows is a list of the Top 10 Patricks In Hockey History (with allowances for the aforementioned variations on the name). So fire up some Pogues, pour a shot of Jameson, break out the shillelagh, dance a jig - whatever Irish thing it is that you do - and get ready to discover the true meaning of St. Patrick's Day, NHL style. 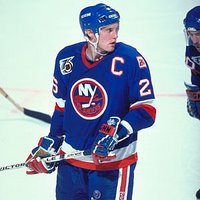 University of Wisconsin and then played on various Canadian national teams, including representing his country at the 1984 Sarajevo Olympics, before the former first-round pick made his NHL debut for the New York Islanders in late 1984. In 780 career games for the Islanders and Rangers, Flatley racked up 170 goals and 510 points, four times topping 50 points in a season and finishing with a career plus-64 rating.

9. Patrik Sundstrom (1982-92) - An accomplished winger in international play and in the Swedish Elite League before coming over to North America, the talented NHL Sundstrom twin tallied 219 goals and 588 points in 679 career NHL games with the Canucks and Devils, topping the 20-goal plateau six times.

8. Patrick Marleau (1997-current) - Drafted second overall in the 1997 NHL Entry Draft, Marleau averaged better than a point-per-game in the first two years after the lockout, but has regressed a bit and is suffering through a relatively miserable 2007-08. The two-time All-Star has scored 20 goals or more in seven of his nine full seasons, but it seems unclear as to whether he's going to be climbing this list in the future or falling off of it. 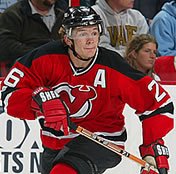 (pictured) has already won two Stanley Cups and played in two All-Star games. He is a six-time 20-goal scorer, three times topping thirty goals, and has totalled 262 goals, 623 points and a staggering plus-163 in 738 career games. Elias, who turns 32 next month, has already played in more than 120 playoff games in his NHL career and has twice represented the Czech Republic at the Olympics, winning a bronze in 2006.

6. James Patrick (1984-2004) - A 1982 NCAA Champion at the University of North Dakota and a Canadian Olympian in 1984, Patrick was taken 9th overall in the 1981 entry draft by the New York Rangers and did not disappoint, playing a steady blueline for parts of eleven seasons with the Blueshirts. Patrick spent the last six seasons of his 21-year career in Buffalo and finished with 639 points and a plus-104 rating in 1280 NHL games to go alongside an enormous amount of international experience.

4. Pat LaFontaine (1983-98) - In 14 seasons, LaFontaine scored 468 goals and totalled 1013 points in 865 games. The two-time 50-goal and two-time 100-point scorer won the Masterson Trophy in 1995, was a member of the 1996 World Cup of Hockey Gold Medal team and was elected to the Hockey Hall of Fame in 2003. LaFontaine is arguably the greatest American-born player of all-time, though some may disagree.

long time minor league blueliner before getting his first shot at the NHL in 1968 with the Leafs, Quinn (pictured) never posted big numbers on the ice and may be best remembered as a player for his questionable hit on Bobby Orr in the 1969 playoffs. But Quinn's biggest contributions to the game have come from behind the bench, where he currently ranks fourth in all-time wins and games coached, won the 1980 Jack Adams Award and coached Team Canada to Olympic Gold in Salt Lake City in 2002.

2. Patrick Roy (1985-2003) - The NHL's "Saint Patrick" won a Stanley Cup and the Conn Smythe Trophy as the playoffs' most valuable player in his rookie year and never looked back. He would go on to win two more Conn Smythes, two more Stanley Cups, five Jennings Trophies, three Vezina Trophies and appear in 11 All-Star games before retiring in 2003 with the most wins of any goalie in hockey history (both regular season and playoffs).

1. The Patrick Family - The individual members of the Patrick would probably account for more than half of the spots on this list, so taking the family as a whole seemed the way to go. And as my summary could never be as inclusive and concise as the first family of hockey would deserve, I'll let a 2001 Hockey Digest Article shortchange the Patricks:

Many hockey innovations owe their origins to the Patrick family: player numbers, artificial ice rinks, line substitutions, and the establishment of both the playoffs and the minor league farm system. The die was cast with brothers Frank and Lester Patrick [pictured], the most influential men in hockey 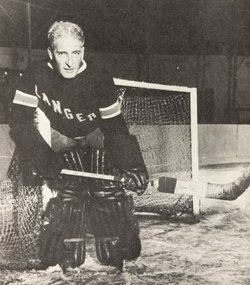 during the NHL's infancy. Their Hall of Fame example was passed on to Lynn and Muzz Patrick, who excelled both on the ice and in the front office from 1934 to 1977. The latest members of "Hockey's Royal Family"--Pittsburgh Penguins general manager Craig Patrick and Washington Capitals [team President] Dick Patrick--have continued the standard of excellence set by their parents and grandparents.

Every major role in hockey has been filled with distinction by some member of this immortal hockey family--player, coach, manager, governor, innovator, advocate, and architect of Stanley Cup championship teams. But no member of the family ever exploited his nobility. Lynn didn't get signed by his father's New York Rangers until a rival manager warned Lester, "either put him on your list, or I'll put him on ours." Lynn's son, Craig, started his executive career as an assistant coach and assistant general manager with the 1980 U.S. Olympic team before his ascent to the top echelon of the NHL. Authors of a hockey legacy as rich as it is long, the Patricks have earned their place as the greatest family in hockey.

"The name is synonymous with hockey," says former Montreal Canadiens star John Ferguson. "The Patricks have made a huge impact on the game, not only on the ice, but off the ice as well--and they're continuing to do that to this day."

For more on the Patrick clan, head down to your local library or check out Mike Vogel's excellent piece entitled "The Patrick Heritage."

I'm rooting for a St. Esa's Day, just so you have to come up with the top ten Esas in hockey.

Sergei's special "Interview Touque" makes him look like such a punk. I love it.

Unless you have a quota on Blackhawks, I would add to that list ex-Hawk and Hartford Whaler, Patrick Poulin and current Hawk Patrick Sharp.

Buffalo would like to offer Patrick Kaleta as an honorable mention.