"When Is A Win More Than A Win?" And Rewarding Failure

Lately I've been hearing more and more about the problem that all wins are not created equal in the NHL and, on a somewhat related note, how the NHL rewards failure (thanks to Off Wing for the pointer). But has either of these made a difference in the standings? With the caveat that of course teams would likely play differently with a different scoring system in place, I looked at a few different scoring systems and the standings they would yield heading into last night's games. Here are the results.

This is obviously the baseline. I've ranked the teams by total points, disregarding divisional leaders (noted with an asterisk).

No Points For Overtime/Shootout Losses 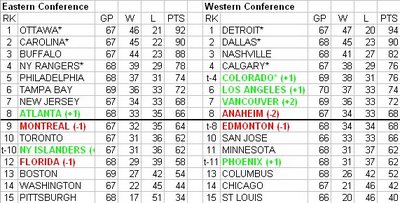 This system should please both camps because a) it makes all wins equal (two points) and b) it doesn't reward failure because each game allots two points to the winner, be it in regulation, overtime or in a shootout and zero points to the loser, regardless of when they lose. My problem with this is that lesser-talented teams that play to a tie for 60 or 65 minutes and then simply succumb to their opposition's superior talent in a skills competition (think about a shootout in which the Capitals send out Alex Ovechkin, Matt Pettinger and Brian Willsie against a Lightning trio of Vinny Lecavalier, Brad Richards and Martin St. Louis, for example) get nothing to show for it. In my opinion, if you're going to decide team games with individual skills competition, at least give the loser something for playing the team portion of the game even. But under this system the game is worth the same to the loser as if they had gotten blown out 6-1. That hardly seems right.

Practically, Edmonton and Anaheim, with 11 and 12 overtime/shootout losses would be the big losers in this system, while Vancouver, who has only dropped six games after regulation would be much more comfortable with their position in the standings.

All Wins Worth Three Points

This option will appease the fans of the ninth-place squad who watch the seventh-place team beat the eight-place team in overtime and yet their team loses ground on both of the teams it is chasing. This system is the most fair of all, as it awards the same three points in every game, whether all three go to the winner (as it would for a regulation win, or RW) or the points are divied up as they are now, two to the winner of an overtime/shootout game (OTW), one to the loser of such a game (so the folks that don't approve of "rewarding failure" won't approve of this system).

Critics argue that a potential drawback to this system is that, as Al Strachan put it, "if three points were at stake, coaches would resort to a trapping game to hang on to a third-period lead." Strachan continues:

There is some truth to that. But if you believe coaches have that mindset, then you also have to accept that they'll resort to a trapping game to get the sure point if they're tied in the third period.

And for every coach who tries to cling to a late lead, there will be a coach who opens up to get those three big points.

Further to that last point, the more games that are decided in regulation, the better, as it will preserve the excitement and rarity of the shootout, which has become a little too commonplace for my liking.

Practically, Vancouver is again the big winner, Edmonton the big losers, as the Oilers don't benefit as much from their 11 overtime wins and the Canucks are rewarded for taking care of business in regulation most of the time.

Another "rewarding failure" critic, the system proposed by Mike Chen would award two points for a regulation or overtime win (ROW), one point for a shootout win (SOW), and no points for a loss of any kind. Chen lessens the blow to the out-skilled team (our Capitals against the Lightning above) for a loss by awarding only one point for a win garnered in the skills competition portion of the game, but for a less-talented team to play a tie game for 65 minutes and walk away with nothing still doesn't sit right with me. Neither does it seem just for two heavyweights to battle it out for 65+ minutes and for the winner to walk away with a victory that isn't worth as much as when they beat up on the League's weaker teams.

Practically, it's the same ol' story - the Oilers and Ducks (and Devils this time) would lose big, the Canucks would win big as the former trio has gone to overtime "too often" while the Canucks generally send their fans home after just sixty minutes of action.

The bottom line - other than that Canucks (and to a lesser extent Thrashers, Isles and Lightning) fans should be mighty ticked by all of the extra points teams like Edmonton and Philadelphia have been handing out around the League by playing so many overtime games - is that the League needs to do something about the current standings system because it makes little sense as it is. But what's the solution?

* Extend overtime to 10 minutes and play normal rules in overtime.
* Allow ties. 1 point for each team.
* 3 points for a win.

It's worth going for the win in overtime because you have more to gain than to lose. The extra 5 minutes would help clear out many ties anyway.

Excellent post! I favored 3 pts for a RW, 2 pts OT of SO wins, and 1 pt making it through 60 minutes tied. But your idea of making OT like real hockey again is a great one.

I'd also favor making OT a 3/0 situation and reserving the 2/1 split for shootouts, which are a bit artificial anyway.

I also thinkout shootouts would be more interesting if they played it as 2 on 1, allowing teams to utilize their defense also.