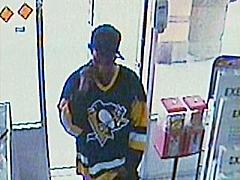 Confirming a long-held suspicion, it turns out that Pittsburgh Penguins fans actually are a lower form of life than the rest of us:

HOLLYWOOD, Fla. -- A man was caught on tape stealing a puppy from a Florida pet store. The surveillance video shows a man wearing a Pittsburgh Penguins jersey taking a "puggle," which is a cross between a beagle and a pug.

On the tape, the man picks up the puppy and appears to place it in his back pocket before walking out.

Click here for all the sordid pictures of the puppy-stealing bastard and his über-cute take.

Hey, if Sid wants a puppy, Sid gets a puppy. Times are tough - cut us some slack.

From a coworker that's a Pens fan (who actually wore a Crosby jersey to work on Tuesday):

"that is actually true.

if it ain’t bolted to the floor, we’s a gonna get it.

this is what being the last place team for 3-4 years in a row and having your hero retire early again will do to a person."