Forwards: In 2003-04, the Canucks fell to seventh in the League in goals scored after finishing first and second the previous two seasons, but would have been higher if their second-best goal scorer hadn't been suspended for 13 games for trying to kill a man on the ice. Put simply, the Canucks can flat-out score goals. Left wing Markus Naslund finished the 2003-04 season poorly (by his standards anyway), slowed by the mid-February hit he took from Colorado's Steve Moore, but the NHL's leading scorer over the past three seasons combined should be back in all-world form early in 2005-06. Speaking of Steve Moore, Naslund's linemate Todd Bertuzzi is back to face his share of boo-birds in opposing buildings as hockey's current number one villain. On the ice, however, there's nowhere to go but up for Bertuzzi who had averaged 41 goals and 91 points over the prior two seasons before 2003-04's relatively meager 17 goal, 60 point effort. Perhaps the best gig in hockey belongs to Brendan Morrison, the lucky stiff who gets to center these two scoring machines and who, as a result, 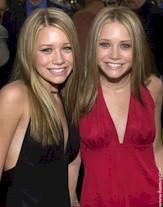 has averaged better than 60 points per season over his past four NHL campaigns. The Sedin twins (pictured) will anchor Vancouver's second line. Through four seasons, center Henrik Sedin has emerged as the more physical of the two, with his brother (left wing Mary-Kate Sedin) the more productive offensively. Personally, we'd trade a few points to get phrases like "completely lacking in physical play" and "when the going gets tough, he tends to disappear" taken off of our scouting report, but to each his own. Regardless, both Sedins will probably achieve new career highs in points and direct-to-video movies in 2005-06. Babysitting the twins on right wing will likely be the well-travelled Anson Carter (they don't make 'em like that in Sweden, do they boys?). Carter, who played on three different non-playoff teams in 2003-04 (New York Rangers, Washington and Los Angeles), is two seasons removed from back-to-back 60 point campaigns and should easily improve on 2003-04's 28 point debacle. Other Canuck forwards who will see plenty of ice time are wingers Matt Cooke and Richard Park and center/wingers Trevor Linden and Ryan Kesler, all of whom will be counted on for double-digit goals and 30 or so points. Human annoyance Jarkko Ruutu will also stir the pot when necessary. With the top line returning to form, the addition of Carter and no significant losses up front, the Canucks will once again be one of the NHL's highest scoring clubs.

Defensemen: The losses on the blueline, however, are more significant. Gone are Marek Malik (league-leading plus-35 rating in 78 games in 2003-04) and Brent Sopel (42 points in 2003-04). They have been replaced by Steve McCarthy (minus-9 rating in 25 games in 2003-04) and Sven Butenschon (7 points in 2003-04) - not a good trade off. But the Canucks' big three blueliners - Ed Jovanovski, Mattias Ohlund and Sami Salo - are all back and, in Jovo's case, finally healthy (hopefully). Jovanovski played in only 56 games in 2003-04 (and only 67 in 2002-03), so he will be looking to stay healthy and return to the form that saw him post 46 points in just 67 games in 2002-03. Ohlund, like Jovanovski, has made himself into one of the better two-way defensemen in hockey, and one of these days Salo's point totals are going to catch up to the speed of his slapshot. When they do, watch out. Bryan Allen and Nolan Baumgartner will also see time on the Vancouver blueline, though neither is what those in the business refer to as "good," and if rookie Kirill Koltsov shows that he is ready for the show, he will undoubtedly find a spot in the top six defensemen. The Canucks will lean more heavily on their top three defensemen in 2005-06, but unless a couple of the other rearguards step up their game significantly or a trade is made, the defense will regress some.

Goaltenders: Dan Cloutier used to be on the New York Rangers, who won the Stanley Cup in 1994. There, we used "Dan Cloutier" and "Stanley Cup" in the same sentence. Don't expect to ever see it that way again, unless the words "no way in hell" are also in the clause. It's not that Cloots is a bad goalie. He's not. In 2003-04 he notched his third straight 30+ win season and finished 6th in both goals against average and save percentage (2.27 and .914, respectively) among goalies with at least 60 starts. His numbers in the playoffs were even better until he got hurt in Game 3 of the first round. But in his six seasons before 2003-04, Cloutier had never posted a goals against average better than 2.43 and only once had a save percentage higher than .908 (and that was in just 22 games). Was 2003-04 Dan Cloutier's breakout year or a fluke? Time will tell, but one thing is certain: come March (if not sooner), Canucks fans will be clamoring for a more proven goalie to lead the team into the playoffs. The battle to back up Cloutier (and, ostensibly, for a chance to unseat him should the opportunity arise) is between Alex Auld and Brent Johnson, with Johnson probably holding an early advantage.

Bottom line: With speed and skill up front, a couple of big hitters who can move the puck on the backline but an overall lack of backend defensive depth, and a somewhat unproven goaltender in the net, Vancouver will be one of the most exciting teams in the NHL to watch this year. They will score a ton of goals, but they will give up a bunch as well. With their talent alone they will cruise into the playoffs, likely with home ice advantage in the first round. Where they go from there depends largely on how the defense comes together and whether or not Dan Cloutier's 2003-04 was for real.
Posted by JP at 9/27/2005 04:10:00 PM

Whattya mean Dan Cloutier is unproven?!? He's proved to be decent enough in the regular season and not good enough for the playoffs...