Alright, Casonblog and Predsguy both tagged me, so here are my five things:

1. I have every Rush album through "Roll The Bones" on CD. 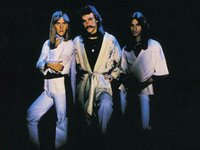 Now I find them unlistenable. I'm not sure why, but at some point in my late teens I found the combination of obnoxiously shrill vocals, sci-fi-inspired lyrics and virtuoso Canadian musicianship appealing. Almost miraculously (and certainly surprisingly), I had a girlfriend at the time.

2. I've never played ice hockey in my life. Not once. I've skated some, played a fair amount of roller hockey and damn near enough Sega/PS/PS2 hockey to make my eyes bleed, but have never once held a hockey stick in my hands on the ice. Then again, there were guys playing for the Caps last year with little more experience (I'm looking at you, Lurch), so I don't feel so bad.

3. I once - once - Welshed on a bet (apologies to Taffy and other Welshmen I may offend with that idiom). Well, I guess I haven't technically Welshed yet, as there was no specified period of performance during which I had to pay up. And it wasn't even technically a bet either, as there was no consideration coming the other way even if I was right. But I lost and have yet to uphold my end of the bargain. Follow me back to the year 2000...

It was a time of innocence and national prosperity (both of which would be short-lived). While nine unelected lawyers were busy deciding who the next leader of the free world would be, I was busy trying to win my fantasy hockey league and one of my fellow owners who was known for slightly over-valuing his players was busy touting the greatness that was Robert Lang. Lang started the season like a house afire, and the unnamed owner was letting us all know about it. I'd had enough and boldly proclaimed then and there that "if Robert Lang score[d] 80 points [that] season, I'[d] get his face tatooed on my ass." Well, Lang ended up with exactly 80 points and I ended up with egg on my face (but no tat on my ass). One of these days I may pay up. But if I do and if I show it around, are there really any winners?

4. The last four digits of my cell phone number are 5247. Alpha-numerically, that spells Jagr. What can I say, I was young and optimistic and by the time he dashed my hopes, too many people had the number to change it. Jagr. Jerk.

5. Not to end on a sad note, but I was in New York City for a long weekend in early September, 2001. A buddy and I were in town to see Michael Jackson at MSG (Jesus, Rush and Michael Jackson in one post - this is more embarassing than I'd thought it would be) on that Monday night, staying with a buddy in mid-town and leaving early the next morning to work the second half of the day back at the Capitol in D.C. Anyway, we got up Tuesday morning, got our acts together and split town, through the Lincoln tunnel a bit before eight o'clock and took in that beautiful view of Manhattan, at which point I turned to my buddy and said, "Say goodbye to the New York skyline, Andy." That was September 11, and the rest is obviously history and the "I'll always remember where I was when..." moment of my generation.

Isn't the idiom "welched on a bet?"

Or am i missing you some deep seated bigotry towards the Welsh?